I counted Jean Dominique among my friends. I listened to his show on Radio Haiti Inter every morning when I lived in Haiti in the mid-1980s, and we were on friendly terms up until the day he was assassinated at his radio station on Delmas in Port-au-Prince on April 3, 2000, along with the station’s security guard, Jean-Claude Louissaint. He and his wife, Michèle Montas, also at the time a broadcaster who worked alongside her husband, translated my first book, The Rainy Season: Haiti Since Duvalier, into French, for an arguably insultingly low fee, because they believed in it — at least that’s what I like to think.

I was first  drawn to Dominique  and Montas because they had courageously opposed the Duvalier regime and because they were like a Haitian version of Yves Montand and Simone Signoret:

Dominique especially  looked like a venerable French actor: vulpine, sharp nosed, sharp tongued, teeth long and yellowed from tobacco, pipe hanging from the mouth or held out in a long-fingered hand for emphasis, sometimes sporting a  Maoist-style cap — and outstandingly handsome for all that. He was explosively articulate, a landmine of truth. I liked them because they were so much fun to talk to about Haiti.

(The Dominique translation of The Rainy Season  has never been published. French publishers: any interest now? THe manuscript is sitting in a cupboard behind me as I write…)

Who was the intellectual author or  mastermind behind Dominique’s  killing? That’s been the big question since 2000. Many friendships have fallen apart over this issue. Indeed, the bullet-riddled body of Jean Dominique in a way lies at the base of the crevasse that has splintered Haiti’s left and transfixed the right.

There are many — mostly to the right of center in Haiti and among Haiti watchers abroad — who do not doubt that former president Jean-Bertrand Aristide was behind the assassination; Dominique, in his usual virulent, vituperative, outspoken way, had certainly been very critical of Aristide during the final year of Aristide’s first term. Others have criticized Aristide, too, of course, and lived (up until the present day) to tell the tale, repeatedly!

But Dominique was different — so goes the argument that pins the blame on Aristide. Dominique was a popular figure in Haiti. Indeed, some 16,000 showed up for his funeral services at the stadium in town. (Fourteen years earlier, some 60,000 had greeted him at the airport as he returned from exile.)

The argument goes on: Aristide had a reason to want Jean Dominique dead because Dominique, who had toyed with the idea of a presidential candidacy, could have proven a serious rival to Aristide in upcoming elections.

Maybe, but this seems on the face of it implausible. Even if Aristide were the kind of paranoid maniac that the Haitian right likes to imagine, he would have had to have been aware that in any election that was even slightly fair, he himself, the most popular politician in the post-revolutionary history of Haiti, was going to win by a very large margin indeed.

In the event, eight months after the assassination, Aristide won with more than 90 percent of the vote in a presidential election that was boycotted by a large and important group of anti-Aristide political parties (because they sensed their upcoming loss) but that still attracted at least 50 percent of qualified voters. By contrast, the U.S.- and OAS-supported Michel Martelly won the most recent Haitian presidential elections in 2010/2011 by a disputed hair, and with only about 30 percent turnout, because Aristide’s party was not allowed to participate — on a technicality: really Lavalas was brutally excluded from the election.

In the 2000 election, Aristide’s closest rival received approximately 50,000 votes, or some 2 percent of the vote, a number equal to three times the number of people who came out to bid Dominique farewell.

So much for how Jean was going to defeat Aristide.

This is not to say Aristide might not have wished Dominique out of the picture; there may be other  subtler reasons why he would have wanted to be rid of this charismatic and meddlesome journalist. Jean was an irritating figure for people who were used to Haitian traditions of deference to power. He did not defer.

Certainly many are hinting at this in Haiti right now, in the wake of the January 18 indictment of nine people, many of them associated with Aristide and/or his Lavalas party, in the Dominique murder. On the Haiti listservs and in the comments on the websites that carry what used to be called telejdòl  (literally “tele-mouth,” or news transmitted by gossip) throughout Haiti and the Haitian diaspora, you can feel Aristide’s enemies slavering for his comeuppance (as if two coup d’etats against him were not enough in that line). 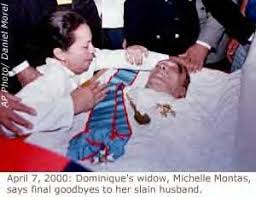 In fact you don’t need to “feel” it: people– especially some who are associated with the Martelly government — are calling for his indictment, even though the investigation by Judge  Yvikel Dabrésil is now  closed, and the judicial report issued, without that indictment. According to Reuters, the summary of Judge Dabrésil’s report states flat out that Aristide ordered former Lavalas senator Mirlande Libérus  to organize the killing. Libérus was indicted in absentia (she lives in the U.S.). Here’s the AP story on the indictments, which is more temperate than the Reuters piece, and makes  claims neither about the content of the judicial report nor about Aristide’s presumed role.

No arrests have been made since the report was issued, and in the next judicial step, Dabrésil’s report must be accepted (or rejected) by the higher appellate court.

As you may have realized if you’ve managed to read this far,  things are not always clear in Haiti and unfortunately a judicial proceeding there — as in many other countries… — is not immune to political influence.

Indeed, one also might jump to the conclusion, from the anti-Aristide venom issuing in the wake of the indictments, that someone is trying to eliminate Aristide from the national conversation. Again.

And why? Why now when it seems as if his influence might be on the wane? And the answer is: upcoming elections, in which the ruling right wing does not want Aristide’s pesky Lavalas party — long the party of the majority of Haitian voters — giving any problems. The chaos that followed the 2010 earthquake has provided an opening for new bottom-rushing businesses, as well as international precious-metals mining interests, to move into Haiti; election organizers do not want to see this steady trickle of investment interrupted by political unrest or any strong show of democracy in action.

Though his enemies like to suggest Aristide had Dominique killed, many think there’s a more obvious reason  why those who ordered the Dominique killing have so far evaded justice. Which is: Some very powerful or very menacing force is threatening those who would dare to bring in the real intellectual author of the murder.

If Aristide had Dominique killed, that at least would be a satisfyingly literary ending to the tale. More likely, it was some angry businessman or some  two-bit gangster whom Dominique had rubbed the wrong way. If Jean was on your case it was easy to hate him. He was neither shy not discreet.

Personally, I’ve always believed that Aristide has to know who gave the order for this cowardly assassination and why. At the time of the killing, although he was no longer president, he was still hugely powerful and very knowledgeable about day to day comings and goings among the Haitian political class, which back then (and still today) included people whom one could classify as  gangsters and mobsters, as well as run-of-the-mill politicians; once the deed was done it seems impossible that the powerful ex-president was not informed about who the killers were and who sent them, if — as I try to believe and do believe — he did not know beforehand.

I also think that  then president René Préval knows who killed Dominique. Préval, a famously emotional man, was in tears over Dominique’s death when I interviewed him in 2000 (Aristide was not, PS) and was the one who set the whole investigative apparatus in motion.

The story of the Dominique investigation includes police work and lack of same, lost evidence, arrests, escapes from prison, disappearances,  the death in custody of two suspects, the disappearance of one corpse, the flight from Haiti of one judge in the case, the breakdown of another, and a rather large number of presiding judges and prosecutors  (10!)…  It’s been  a theatrical, decade’s long Grand Guignol drama (a criminal version of Jarndyce and Jarndyce, smacking a bit, too, of the JFK assassination saga) during which the unmistakable voice of Jean Dominique seems to call out to us for justice from the Artibonite River into which his ashes were scattered (a  scene which was captured in Jonathan Demme’s beautiful 2003 documentary on Dominique, The Agronomist).

where his soul resides…

Dominique’s like will not come again soon onto the stage of Haitian politics: and that’s exactly what his killers wanted. No more loud-mouthed truth-tellers.

If he were alive, Jean Dominique would be the first to point the finger at his killers and say their names out loud into a live micro.

Sorry:  that’s the kind of head-spinning logic that this whole sorry tale has engendered.